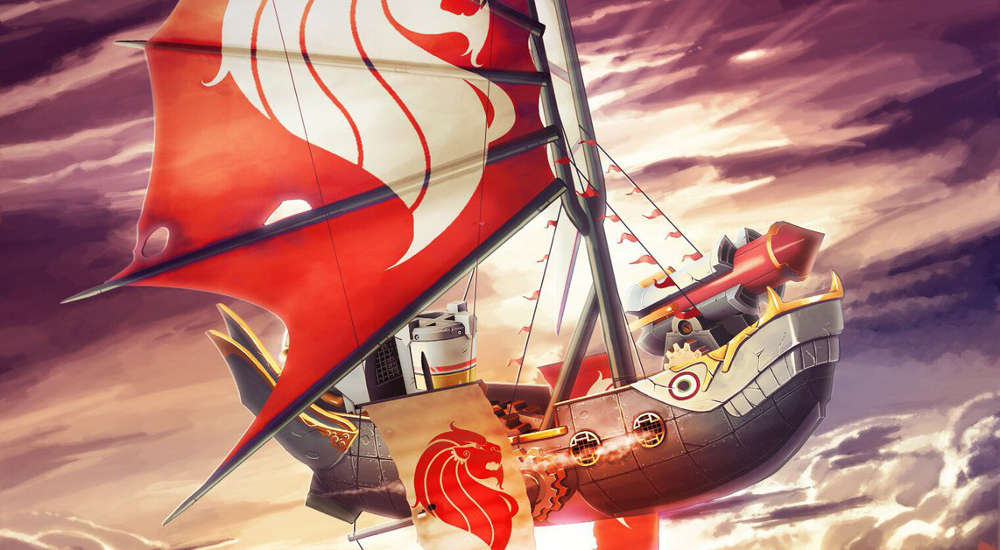 Set sail and be ready to embark on a flying ship adventure filled with conquest, trades, destruction and a li’l bit of ramming!

Avertigos is a 3D flying sail miniature board game developed by Playware Hobbies and funded via Kickstarter right here in our very own little red dot!

Inspired by an alternate history of our world with a steam punk/sci-fi twist, this first instalment takes place in the South China Sky, where the Dynastic Naval Armada is facing off against the combined fleets of the Singasari League to exert supremacy over strategic islands and control rich trade routes plying exotic goods.

There’s 2 modes of play with the base game itself, Strategy and Skirmish.

Skirmish is a 2-5 player game mode that doesn’t really require a play mat and can be played almost anywhere and usually lasts about 30+ mins. The objective of a skirmish is simple: have your airship destroy every other airship and be the last one standing. (Honestly it’s that simple!)

However, the depth of Avertigos comes a lot more from the 2-4 player 60-90 mins or longer (I’ve played for 4 hours) Strategy game, with 3 different ways to win, your options are endless. You could play the game more politically and strike deals with other players to secure trade routes for coffee, opium, marlin or oyster supplies in order to declare a Trade Victory or you could be more aggressive and try to conquer and hold 8 islands of your own to declare a conquest victory or you could just be a complete badass and try to wipe out every other player’s fleet and kick them out of the game 1 by 1 (I’d go with this option 100% all the time)

Where the game gets interesting is that at the start you are only given one small scout boat and zero islands! Each player’s objective is to conquer islands and set up trade routes to earn gold. Every island has specific resources and values, and having 2 or more islands with the same resource (eg. owning 2 islands with a coffee resource or 3 islands with a marlin resource) would earn you more.

This gold, in turn, gives you the option to buy trade hubs (which double your island’s value of gold production), troops, land-to-air missile launchers (which help prevent other players from taking your islands), and most importantly, bigger, badder airships that help you to defend yourself or attack (depending on how you want to use them) other players, these airships are big game changers as you can destroy other player’s airships to take over their islands with much greater ease or use them to tell other players to not get in your way. So everything depends on your own strategy of how much gold you want to make and how much are you going to invest in each option.

I believe that at the core of it, what sets Avertigos apart from other board games is the 3D factor and the modular airships. The 3D factor of Avertigos is made possible with their height widget that airships sit atop of. These height widgets help players to physically adjust the height of their ships ranging from height 1 to 3.

Why each height matters is because all modules (Weapons) on airships have different height and range capabilities, meaning that I could be at height 1 and in range of my opponent’s ship at height 3 but I still can’t shoot him as my module is incapable of shooting 2 heights above me. This gives Avertigos another layer of depth and strategy of gameplay.

NFL and 2K Agree to a Multi-Year Partnership

The other cool feature of Avertigos is the modular ships, which means you can customize each ship to your style of gameplay, meaning every players ship is going to be different and the best part is it even shows on the physical airship itself! Every module you buy in game can be physically placed and taken off the ship (it is a very cool factor).

This also means that players have much wider options to suit their play style, some players might want to have an airship more suited to taking over islands, so they would buy modules that are more aligned with that objective. Whereas other players (me) would build ships with the intent of destroying other ships. This modular ship system does make Avertigos feel a little more different with each play in turn encouraging more replayabilty.

Overall, Avertigos in my opinion was designed and executed beautifully and really did turn out to be a great contender in the board game industry. Admittedly the price can be a bit off-putting for casual board game geeks and the learning curve for strategy mode is a bit more diffcult,  I strongly believe if you can look past those 2 negatives Avertigos will definitely be a worth while investment.

Avertigos is now available on their Kickstarter page and will be shipped out in April 2018.

Miesha Tate talks about MMA, Breaking Barriers, One Championship and The Apprentice

Razer to Set Up Face Mask Manufacturing in Singapore

Blizzard Wants You to Design a Map for Overwatch!

O! Emma, What Was The Point of Thee?

Endogenesis: Beyond Goes Above and, well, Beyond!

Sonic the Hedgehog Hits the Ground Running with His New Look!

Saucy Grannies is an All-Rounded Game for Friends and Family