HBO’s Justice League Dark has plenty of mystical characters to choose from, but it might have to stave off on a classic choice or two if it wants to hold its own ground.

Justice League Dark proves a perfect opportunity for DC to delve into realms that are less often associated with superheroes on screen: magic, and sorcery. While Constantine, Titans’ Raven, and the MCU’s Doctor Strange have all broached the subject, neither superhero universe has gone to Winchester extent just yet. And with JLD practically being a Justice League-branded version of Shadowpact and Sentinels of Magic, there’s no doubt we’re going to be seeing some epic mystical action.

But more than just the opportunity to explore the planes of darker, more mystical forces, the JLD series is a great time to bring some intriguing lesser-known characters to light (or…dark). With Constantine, Madame Xanadu, Deadman, Zatanna, and Shade the Changing Man comprising the founding line-up, and the recent Justice League Dark: Apokolips War (May 2020) animated film assembling to decimate Darkseid, it’s clear that there are plenty of potential universe-wide elements to bring to general audiences’ screens.

How can HBO hold its own ground? Here are seven classic characters who should only guest star in JLD (including Constantine), and seven who should be in the core team.

7 Classic Characters Who Should Guest Star in JLD

With Constantine being one of the founding members of JLD, saying he should only guest star is probably a hot take. Well, here’s my hot take. It goes without saying that television’s current Constantine, played by Matt Ryan, is bewitchingly charismatic and very well-loved, especially by the growing fanbase that Legends of Tomorrow has.

If the HBO DCverse wants to step out of the shadow of the Arrowverse, then having a character so recently portrayed brilliantly by Matt Ryan may not be in its best interests. The only solutions would be to have JLD set in the Arrowverse (a la Supergirl when she was on CBS), and risk him overshadowing the whole team, or to just not have Constantine at all. Our suggestion: keep him on call much like Oliver from Green Arrow did. Theoretically, it all began here, with Constantine first being a supporting character, and both of these characters being a pivotal part of the Brightest Day event just prior to New 52 when JLD was first formed.

But the VFX the character requires could be a budgetary issue, and technically speaking, he can also be a little overpowered at times. He’d be better used as an infrequent ally or bridge, and an occasional force-of-nature threat that’s worthy of a season finale–especially after the untimely cancellation of the live-action DC Universe Swamp Thing revealed that the character was intended to help preface JLD. 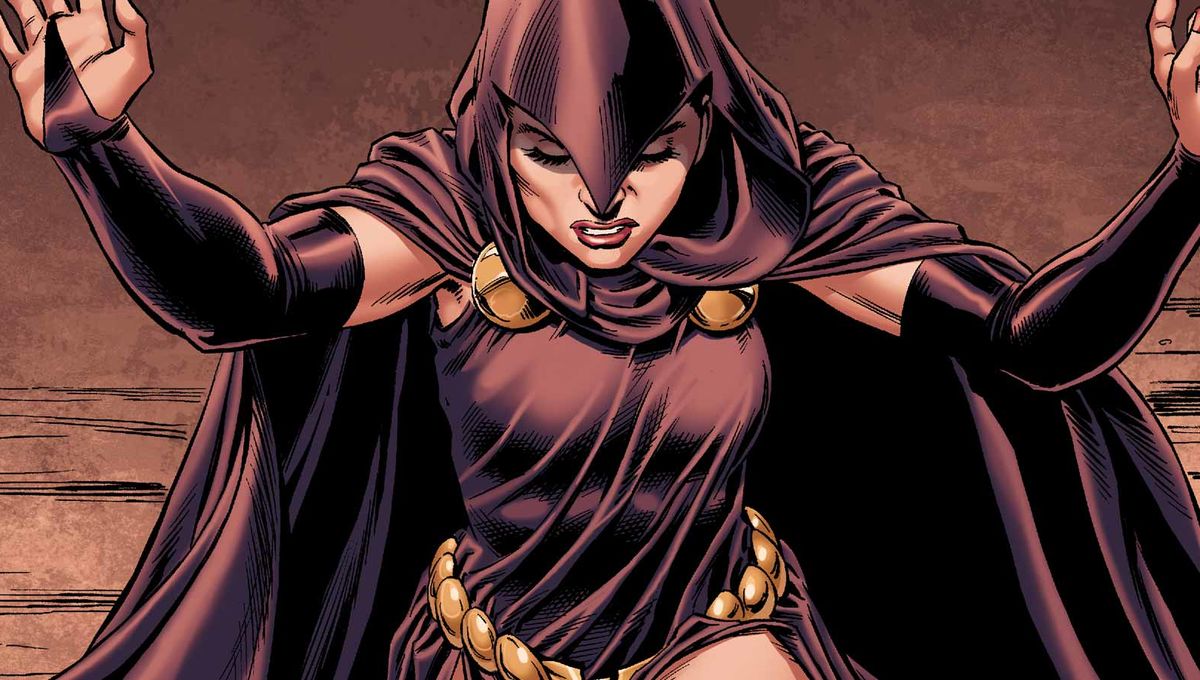 A Teen Titan favorite, the character’s been explored quite enough between the Teen Titans animated series and the ongoing streaming series, Titans. Her character arc also tends to be repetitive, building towards her demon-lord father Trigon, and culminating in an “I reject my darkness within” trope.

We also very recently saw this happen in a JLD context, when the Justice League Dark: Apokolips War movie saw the freeing of Trigon from Raven’s mind, resulting in some brutal events. The last thing we’d want for a character like Raven would be for her to be used as a mere plot device. 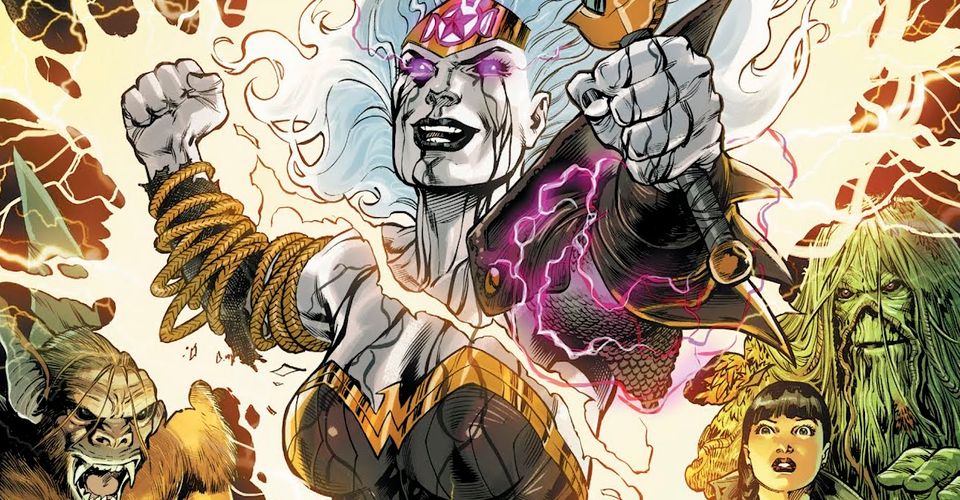 For anyone wondering why Wonder Woman’s on the current JLD team in the comics: WONDER WOMAN IS LITERALLY MAGIC! From her birth to her being a demigod, the character is a literal magic princess. How it took EIGHT DECADES for her to join a magic team, is beyond us.

That said, the character is essentially one of DC’s mightiest heroes, and WB has a record for not wanting their characters to exist on TV and movies simultaneously. But with the ground-breaking appearance of not one, but three Supermen on CW’s Crisis on Infinite Earths, and the meet up between Ezra Miller’s and Grant Gustin’s Flash, maybe JLD could wrangle a one-time Gal Gadot appearance? And with the price tag of a movie star, she would be best used in small doses.

Arguably one of the most iconic characters in the cosmic and mystic ends of the DC Universe, the Spectre’s involvement in comics dates back to the Golden Age. A prime opportunity for stories that date back to older eras, Spectre would automatically lend itself to noir-style storytelling (always a welcome genre in supernatural media).

Spectre would also be a character that can pose an interesting dynamic with the main JLD team, depending on its host. Also, if we’re continuing with the assumption that JLD is part of the Arrowverse, it’ll be an opportunity to crossover the Arrowverse’s answer to MCU’s Iron Man: Oliver Queen. 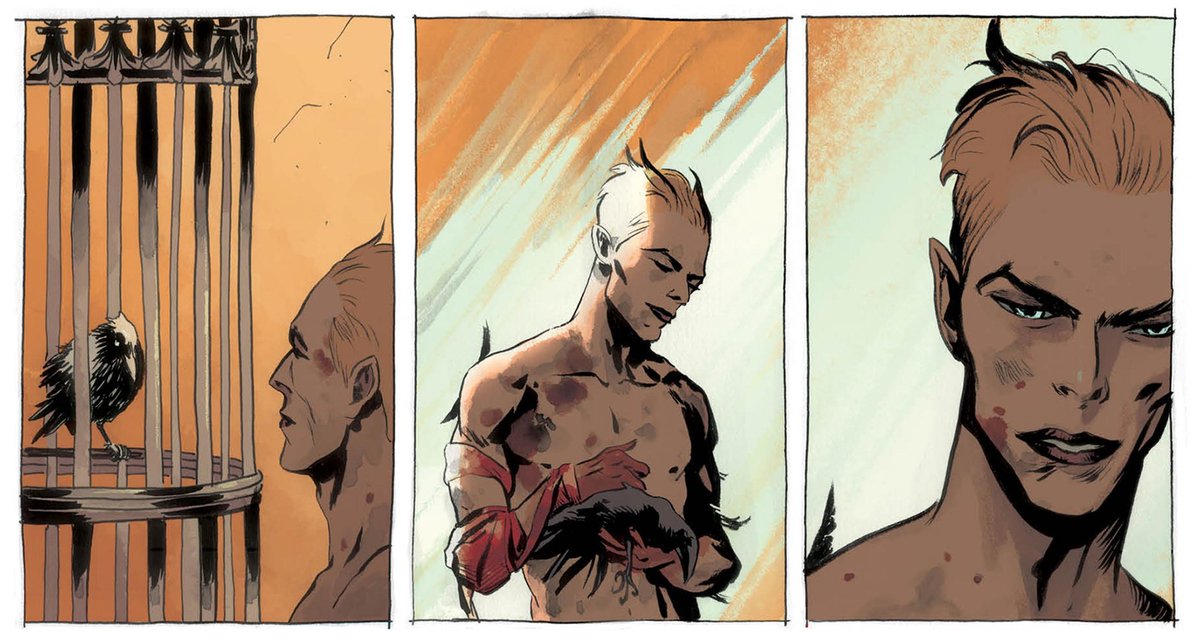 ‘Cause, y’know. Lucifer, the devil that we all desire! The fallen angel portrayed by Tom Ellis on Netflix’s Lucifer show even worked with Constantine during the epic Crisis on Infinite Earths crossover. Tom Ellis brings such commandeering presence to the character that it may not be a very good idea to have him be part of a team, where attention and arcs need to be divided.

Having Lucifer as part of the JLD may also mean some power imbalances, given that his potential power levels may render the others on the team irrelevant, and perhaps even make him more lethal than the Spectre itself. A nerf is definitely possible, but…we’ve already seen a weakened Lucifer on the Lucifer show, and we’d much rather see him wreak unfiltered havoc in the occasional appearance or two! This mistress of magic is surely a fan favorite, but much like Constantine and Raven, she may be best used in small doses. Assuming JLD is set in the Arrowverse, it could go bold and take a narrative jump in time to have Zatanna and Constantine already be a couple, and with a child nonetheless—Kingdom Come’s Zatara Constantine.

7 Characters Who Should Be In the JLD Team 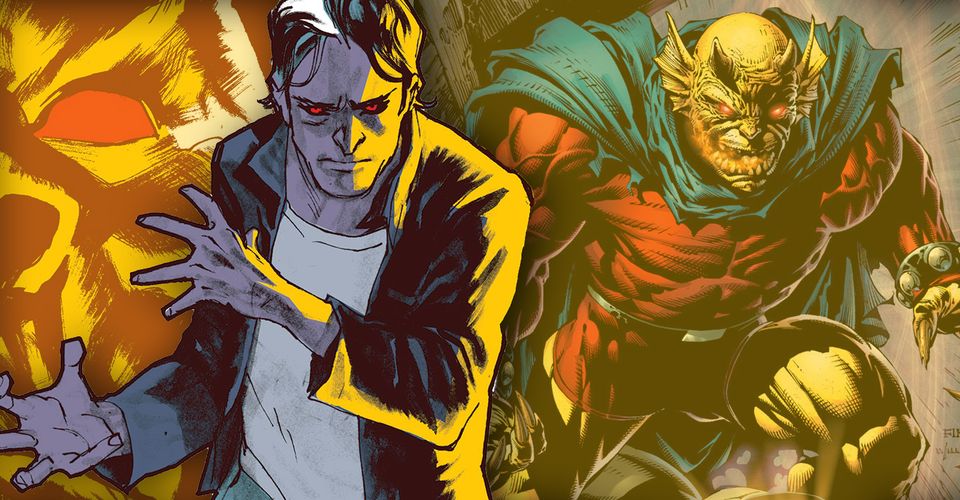 Arguably a budget-friendly substitute to Swamp Thing, Jason Blood is a knight from the time of Arthur, as in King, who is bonded to the demon Etrigan, Merlin’s half-brother, rendering him immortal. Like Firestorm in DC’s Legends of Tomorrow, Etrigan would be a character mostly in his human form, going demon only when budgetary requirements allow for as much. Additionally, as a romantic interest to Zatanna, the character would deliver some interesting interaction with Constantine as well.

Remember what we said about overpowered? But hear this, the helm of Nabu would be an interesting mechanism to spotlight various characters over the JLD’s adventures as people worthy of wielding his powers. After all, no less than 10 people have laid claim to the name Doctor Fate. 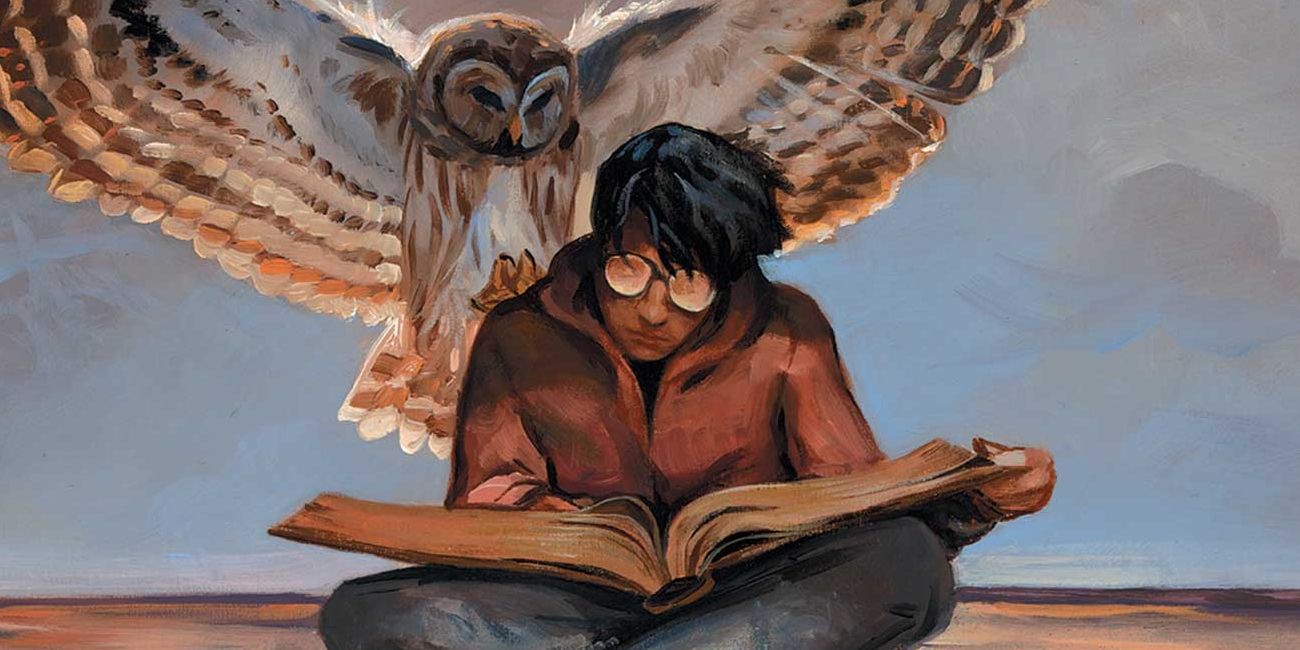 What If…? Avenges the Undead with Marvel Zombies

Imagine if you will, a British lad born of mystical portent, fated for greatness, plagued by mysterious occurrences, pursued by magical cults, and offered to be trained by oddly-dressed older men? But instead of coming to life in the words of J. K. Rowling, this boy wizard would exist at the behest of Neil Gaiman. No, this isn’t some meta-fictional fanfic of a world where Harry Potter was created BY Gaiman–this is an actual DC Comics character: Timothy Hunter.

Timothy could serve as a gateway to the magic of classic storytelling, creating means to bring a sense of whimsicality to the wicked awesomeness of the occult. It wouldn’t even be the first that the character has worked with the team. In The Black Room JLD storyline written by Jeff Lemire, Timothy Hunter and Zatanna find themselves caught in a world where magic has been banished by mad scientists, and the rest of the team soon shows to help save the ‘Wild World’. 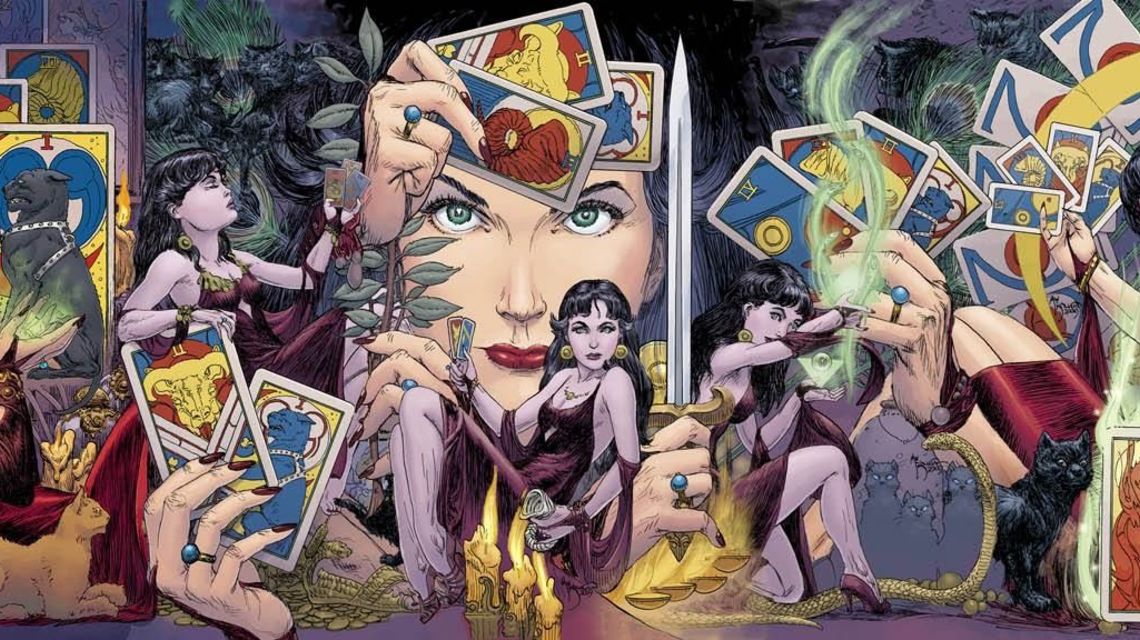 A character with origins dating back to Merlin as well, Xanadu is an efficient bridge in story-telling. Her backstory as Nimue, Merlin’s lover, and sister to both the Lady of the Lake and Morgaine Le Fay allows her to be positioned as the team’s source of counsel and wisdom, the Rupert Giles to the JLD’s Scoobies. And with her gig as supernatural advisor in a fortune-telling parlour, her early appearances often featured the character as a framing device for narratives that had little to do with her as a participant.

Madame Xanadu has also, at different points in time, been a consort of Kon-Sten-Tyne’s and has even had a son with him (an ancestor of John Constantine). She has also been involved with Zatara (before he meets his eventual wife), been the jailor of the Spectre, and even been an accomplice of Phantom Stranger. Her immortality is attributed to her besting Death (of the Endless) in a card game. 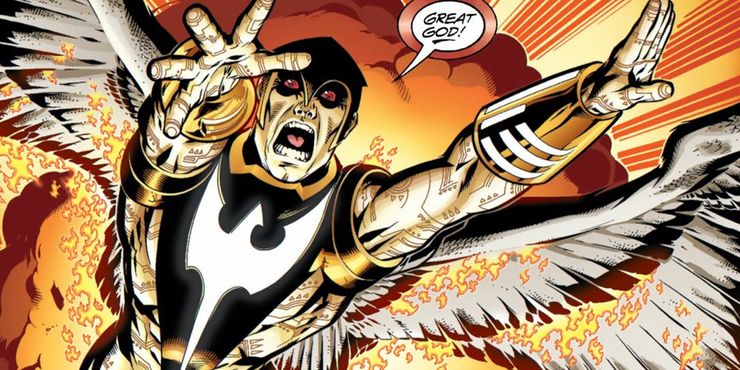 It was going to be a toss-up between Zauriel and Andrew Bennet of I, Vampire. But the ‘broody vampire with a dark past’ trope on TV has been done to death, so an angel who willingly falls seemed a lot cooler. Unlike his brethren (including Lucifer and Amenadiel) Zauriel relishes his role as a hero on earth. Fittingly, he was first recruited as the magic expert of the Justice League of America, a role that is now expanded to the entirety of the JLD. 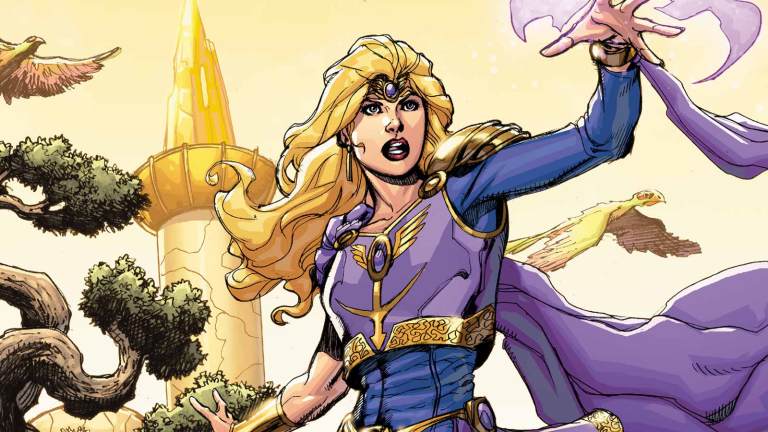 Originally known as Amethyst prior to DC’s The New 52 rebrand, Amaya is the princess of House Amethyst, brought up on Earth as Amy Winston, in a bid to protect her from her ruthless aunt. While the character was not part of the starting line-up of Justice League Dark, her relationship with Tim Hunter, as well as the unique element of a female character embodying the Sword & Sorcery element of the team makes her an interesting key player.

Like the comics, the character could be wary of Constantine given his reputation, while also fearing the fate of magic on Earth given the JLD’s regular reckless involvement.

The Trinity of Sin

The man of many tales: Judas Iscariot (the Phantom Stranger), Pandora of Greek Mythology, and the Question. Yes, yes, we’re suggesting three characters in the place of one. But we’re not cheating… technically. While all familiar with DC’s The New 52 know that these three characters play a part in the bigger scheme of things, the JLD series could use this trinity in a rotating manner for their seventh spot. After all, the number seven would be a natural choice given its mystical significance.

For every mission at hand, Having one of the Trinity fulfill the role of the seventh member would make for an interesting episode-to-episode dynamic, and would signify that shit’s really gone down when all of them appear together on Justice League Dark.