Heroclix brings Super-Battles to Your Table

Kyle Ong·
Geek OutReviewsVideo Games
·June 1, 2014·4 min read
It's definitely addictive and there are an infinite number of combinations. The figures are well made and it doesn't cost much to begin playing.
Ease of Play
5
Cost of Entry
7
Content
10
Build Quality
8
Availability
7
Replay Value
8
7.5

HeroClix is a collectible miniatures game that, combines chess and dice and is centred around the world of heroes and villains. While most characters jump straight out of the Marvel and DC comics, you also have heroes and villains from other iconic titles like Star Trek, Yu-Gi-Oh!, Pacific Rim, Lord of the Rings and Dungeons and Dragons. You then engage in a turn-by-turn battle on grid maps based on various storyline locations. The best part is, all the different universes can play and battle one another!

In this review I will be touching on the basics of HeroClix as well as some of the good and bad points of the game and why every geek out there should at least try the game or get some of the amazing figures.

Let’s begin with the most basic of basics, forming a team. In order to form a team, first you decide on the maximum point value for that particular battle.

What does that mean? Well, every figure has a point value  – which is printed on the cards that the figures come with and the figures themselves. The higher the point value, usually the more powerful that character is. This is how the game balances out the more powerful characters from the weaker ones, so it’s your choice to have let’s say a massive and extremely powerful hulk and one or two fodder on your team or have an evenly balanced team like the X-men. It’s really up to your preference and strategy.

How do you win? Simple… obliterate the other team. That’s it. Done. 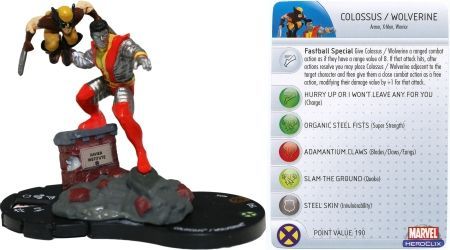 Each character has a unique set of abilities that keep changing every time it takes damage or heals. This keeps the games variability always at a high. This enables you to develop combos and tactics to keep your opponent on the back foot – developing a synergy between characters can be essential to crushing your opponent.

Trust me, from personal experience after trying the game once I was instantly hooked. I wanted to know more about the game and how each character could complement one another. My current team being the Thunderbolts from Marvel comics consisting of Deadpool, Elektra, Punisher and Red Hulk relies on a more strategic hide and hit approach rather than just hitting hard and fast.

Now enough with the technical stuff let’s get serious and get into what makes HeroClix the next big thing.

Trust me, the design and detail alone will catch your eye once you see it. The figures are really well thought out and the detail is really intricate and impressive – especially the latest releases. The reason I first wanted to get my hands on HeroClix was actually more because of the design rather than playing the game.

So for those of you that like to collect detailed marvel figures but do not want to spend so much on those pricey statues , this is a great reason to start collecting HeroClix, and who knows… You might actually enjoy the game as well!

What do I mean by flexibility? Well imagine a DC Marvel crossover you’ve always wanted to happen. You can have a team with the wildest team-ups such as Darkseid from DC and Thanos from Marvel vs maybe a Kaiju from Pacific Rim teamed up with Blue-Eyes White Dragon from Yu-Gi-Oh! On let’s say Wakanda. Now which geek in the right mind wouldn’t want to see that?! It would be pretty darn EPIC.

You can put whoever you want on your team whichever way you like – as long as they meet the point cap. How many games out there actually let you do this kind of stuff with no hassle at all?

And here’s a big, BIG plus… they’re coming with new boosters and expansions all the time with figures inspired by the movies and games as well!

There are many ways to procure figures. There a single booster packs where you get 1 figure boosters, 5 figure boosters, and pre-set teams for beginners who just want to have a team built and ready to play. There is a huge element of luck and but who knows… you might end up with an extremely rare figure – it’s been known to happen.

If you don’t like the idea of blind packs you could just purchase specific figures from players who have extra or are wanting to sell their figures. This gives players or collectors an option to not spend so much to get more figures.

With the amount of expansions already out its pretty easy to find your favourite characters as they would have already have been made at least once during the run of HeroClix so there are no worries in that department.

I can’t be all one sided here. Even though this game is really amazing, everything has its flaws.

Rules and abilities can get a little complicated. I won’t lie, first few times I’ve played HeroClix I played it completely wrong. You really have to go through the rule book to play the game right. The abilities can get a bit troublesome to remember too so it’s always useful to have a ability rule book while you’re playing so that any dispute with your opponent can get easily resolved with a simple double-check. This though may be a turn off to some people as constant referral can get tiresome.

I don’t know about other people but rarity systems to me just mean forking out more money to try to get the more powerful and cooler figures.

These are the rarities and a rough estimate on the probability of getting them based on 5 figure booster boxes. Common: 2-3 per box, Uncommon: 1-2 per box, Rare: 1 per box, Super rare: 3 per 10 boxes and Chase – yes that’s a rarity and it’s the rarest – 1 per 10 or 20 boxes based on the expansion. So if you want to collect them all it’s going to cost you a lot of money.

To sum it up HeroClix is a game everyone should keep an open mind. It’s definitely addictive. If you don’t believe me, drop by Atom Comics – they usually have live demonstrations. So do give the game a try you. You definitely won’t regret it!