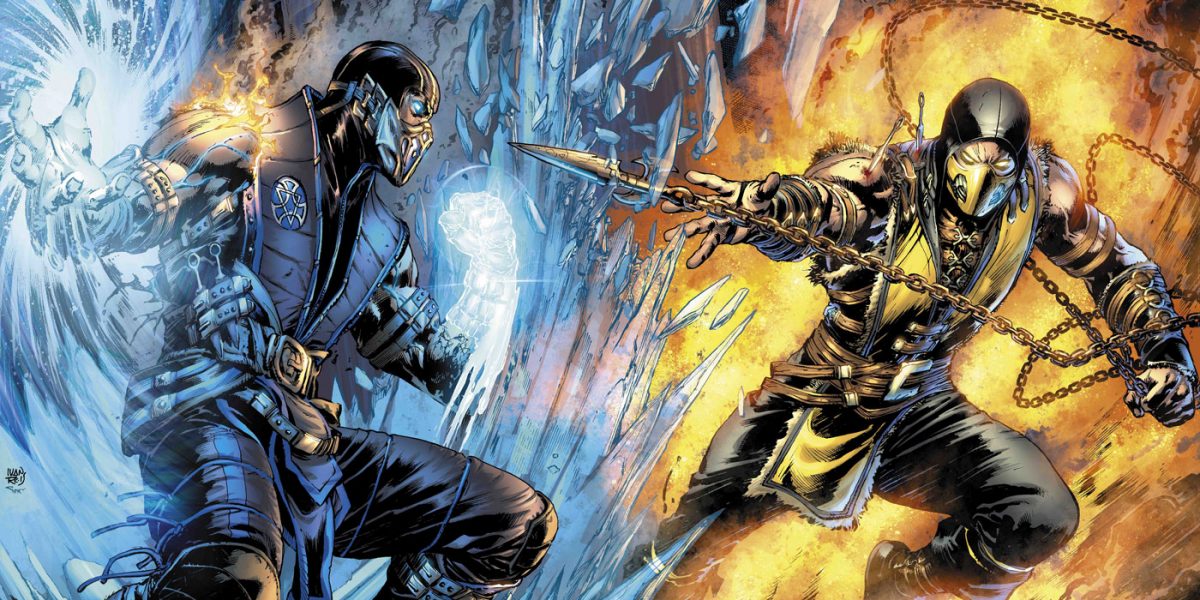 Now if you didnt know yet, following the release of Mortal Kombat X on consoles, Mortal Kombat X #1 will hit comic shops around the world, on 7 January 2015 with not one but THREE amazing covers (2 connecting covers and a game variant).

Mortal Kombat, a cult classic in the 90s which later had its own blockbuster movie with state-of-the-art special effects and, more recently, had a crossover with the DC universe, is set to amaze us once again with it’s blend of violence, blood, sexy women and fatalities.

The game had so many great things going for it and I hope it translates to the comics as well. Here are the top ten things I DEFINITELY want to see in Mortal Kombat X #1.

Alright, alright calm yourself down. Let’s all admit, blood in Mortal Kombat is like, Bacon in a Carbonara’s nice cream sauce. Without it…it’s just not Cabonarra. We crave for it like bloodsuckers (in the MOST LITERAL SENSE).

We want to see our character beat the living day lights out of our opponents. I say blood for some good fight scenes, blood for some dramatic scenes and blood…just…well…everywhere?

Remember first time you saw Liu Kang change into a Dragon and bite HALF off his opponent’s body with blood (again) spraying everywhere? Yeah…I totally want to see that.

Imagine a huge fight scene with the animal spirits. So many questions… where do they come from? what astral magic is this? And what are the other animalities out there?

3) The Women of Kombat

Talk about women power – not only are they sexy and strong in game, but I want to see them kick ass in the comics – be the hero saving the “damsels” in distress. The comic world needs alot more women like that, I think Mortal Kombat is going to answer that.

Now I dont know about you, but the one thing I DONT WANT TO SEE is Batman in the midst of a fight with Subzero and Scorpion. Leave it to them, let them have their own world without DC Characters. Its the originality of the KOMBAT world that roped us in. Recently there have been too many crossovers and I do hope that Kombat wont be one of those to surrender themselves to marketing gimmicks. Leave the characters alone….let them fight among themselves and tell you a different story.

I remember this one time I got my ass handed to me in Kombat, and there was my character, spinnimg around, dazed, waiting for the finishing move!

“Oh god, here comes!”. With controlled focus on what my friend was pressing on that little handheld control, he smiles this evil grin….here it comes…is he gonna decapitate me? Throw a spear in my head? WHAT WHAT….a PRESENT?

New ninjas, new fatalities, exciting new histories and stories that had potential to be told. Well I do want to see that, new characters with new histories in the comics. Brought to life by good art and an engaging story…that is what Mortal Kombat was all about…the NEW GUYS. What can they do? Their history? I want to see NEW CHARACTERS…who knows, we could even see those characters in the next game.

Why didnt I think of this sooner? Why is it not at the top of the list?

Be it a ice spike through the guy’s face or 20 different ways of decapitation, I WANT TO SEE THAT. That’s the whole point of the game, daze your opponent, press a complicated combination of buttons, perform a fatality and LAUGH AT YOUR FRIEND.

Now I think one thing a comic needs is death, it is only through Death that a character grows. I want to see death in a way that builds our characters to a whole new level of story telling.

Wait wait let me try to remember this. Was it, down, right, heavy punch for a Ice Freeze? Hold heavy kick for 5 seconds for Liu Kang to go crazy kicking?? yeah, I want to see those MOVES in the comic panels. Some of the games most iconic moves weren’t even in the movie itself (which I was kind of okay with). We want to see some of those moves and go “HOLY CRAP HE’S DOING IT!”.

Sonya and Kano, Liu Kang and Shang Tsung, Subzero and Scorpion…..Johnny Cage and Goro (The poor guy got punched in the balls, he should have a feud). It is feuds like this that drives stories, forcing people to choose a side, feel for the character you chose and see him struggle through the feud. And I want to see NEW feuds come about, Could you imagine Reptile and Noob Saibot? Or maybe Kitana and Liu Kang? oooooo what a tangled web we weave indeed.

Those two words should be the best remembered words in Gaming History. I know its gonna sound corny and lame but, I would love to see somone…anyone…anyTHING say those two words “Finish him”.

So there you have it, disagree or agree with me, its fine. I guess we would have to go at each otherin a game or two huh?

The comic might only come out in January, but till then here’s Scorpion and Sub-Zero in action: