Craft beer has a pretty bad rap. Most people see it as the domain of snobbish hipsters who will judge you based on the brew you imbibe, while others are puzzled as to why people like me hold beer to such a high standing. “It’s just a fizzy yellow drink, isn’t it? Something for me to quench my thirst?” Well, I am here to present to you the beauty of this fermented beverage, in the hopes that you will enjoy it one day. So ignore the judgmental gluten intolerant nut analyzing your drink, and follow me.

When you look at the essentials, Craft Beer is the least pretentious, the most accessible, yet the most affordable artisanal alcoholic beverage around. Also, with a few exceptions, the people are some of the most friendly and inclusive individuals you will ever meet. Those who have bumped into a group of beer geeks at Beerfest can attest to that. Just pay no mind to the fedora guy, he’s a weird one.

But of course, there are some rules that you should abide by if you wish to fully enjoy craft beer.

There is a reason wine isn’t typically drunk from the bottle, or whisky for that matter. Your sense of smell contributes to approximately 90% of your taste. That’s why during flu season, your chicken rice tastes like white rice.

When you drink from the bottle, you cut out the sense of smell from the equation. Your beer is nowhere near as aromatic and flavourful as it should be. While there are specialized beer glasses, even the most hardened beer expert will agree, a lousy glass is better than no glass. Even a plastic cup will do. So understand that I’m not trying to kill the earth by offering you a cup with every bottle you buy from me at Beerfest, I am trying to help you appreciate that amazing Imperial Chocolate Stout you have in your hands. This rule has an exception. If you are on the beach, the beer is ice-cold, and there is some kind of citrus stuck in the bottle, you aren’t drinking that swill for the flavor anyway, so just take a swig. This brings me nicely to my next point.

Rule #2, Colder is not better 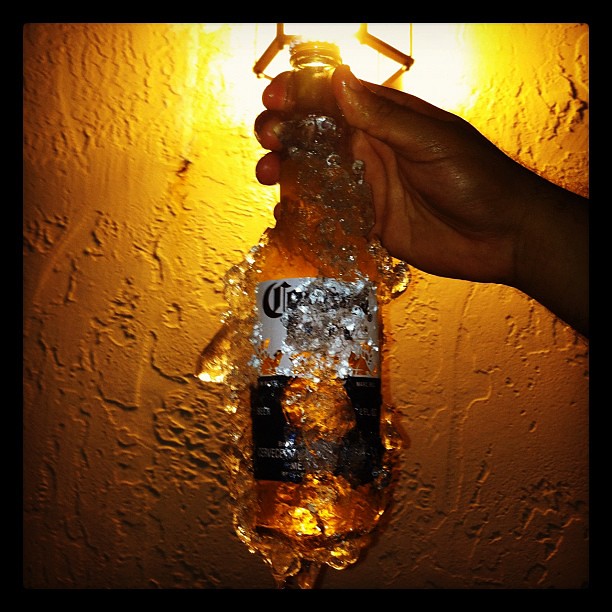 Of course beer needs to be chilled, no one likes a lukewarm beer, especially in Singapore. However, people insist on the beer being ice cold, with certain breweries boasting that their taps deliver beer at below freezing. At those temperatures, your taste buds are numb. You cannot taste anything, which is exactly what those breweries want in the first place.

Generally beer should be served in the range of 8-14 degrees Celsius. Rule of thumb is boozier beers should be served at warmer temps. But you don’t have to be exact. Pour the chilled brew in a glass, drink it slowly and observe the flavor change as it warms up.

P.S. There is a special place in hell for people who put ice cubes in beer.

Rule #3, Dark Beers are not all Bitter

I have no goddamn clue how this myth came about. Maybe some idiot was looking at a stout and went “Well, it looks like coffee, must be bitter”.

Maybe most people just confuse astringency with bitterness. Maybe we are just so used to watered down beers that any form of flavor is seen as bitter or unwanted.

This misconception is one of my top pet peeves, maybe due to the fact that I believed it for a while. The truth of the matter is, some of the sweetest, most dessert worthy beers are dark. When you use roasted and toasted grains in a beer, the flavours that come out are reminiscent of Chocolate, Coffee, or even Cookies and Cream. Hell, the stout is such an amazingly sweet beer that people pop a scoop of ice cream in it to make a stout float. I am not making this stuff up, Google it.

To explain this rule, we have to dabble in a bit of science.

Beer is bitter due to Hops, a flower that when boiled with the unfermented beer, develops Isomerized Alpha Acids, which contribute bitterness. Now when beer comes in contact with sunlight for a period of time, the acids break down into Sulfur compounds, and will taste off, or skunked.

Brown bottles help to block out some of the light for a period of time, while green or clear bottles don’t help at all. That is the reason for the horrible green bottled beer you had at the Hawker Centre, where your friendly drinks store uncle has left his crates of beer outside in the sun for hours on end. To preserve the longevity of beer, most craft bottleshops keep the beer in relatively dim settings. Certain shops such as 99 Bottles turn off the lights when no customers are around, all for the sake of beer.

Now you see why cans are awesome. They don’t allow any light in whatsoever, and they don’t have bottle caps which have a chance of spoiling the beer. They keep the beer fresh, which for certain beers such as IPAs, is of the utmost importance. Just to put a cherry on top, cans are fully recyclable.

There are dozens of styles of beer. In these styles there are sub-styles, followed by breweries interpretations of those said styles. With that, I can safely say there are thousands of beers out there, all differing from each other, being enjoyed in different ways.

Beer is the very drink of innovation, because I could add any ingredient into a beer and it would still be considered one. If I add strawberries in a wine, it is considered a separate category. But I can add anything in to beer. ANYTHING. Chocolate stout? Sure. A beer infused with Tobacco? Bring it on. Whisky barrel aged porter? Pour me a pint. Hell, I have tried a Bacon beer.

There is a whole world of beer beyond the pale yellow pilsner. In later articles I will describe certain styles in detail. But why wait? Go out to a craft beer shop and experiment! Try something new!

Remember, it isn’t only what you drink, but who you drink it with. #justsaying